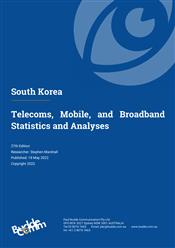 South Korea drives up its 5G adoption and data usage

South Korea is second only to Hong Kong in the world rankings of telecom market maturity. It enjoys a highly competitive but stable market, with strong central government support that helps drive the rollout of advanced infrastructure in both the fixed and mobile arenas. South Korea is also on the leading edge of the latest telecom technology developments, including around 6G. And it is host to two of the world’s top equipment manufacturers in the form of Samsung and LG.

With its highly urbanised, tech-savvy population, South Korea also enjoys very high penetration levels across all segments – fixed-line telephony (44% at the start of 2022), fixed broadband (46%), mobile voice and data (144%), and mobile broadband (120%). The performance of the mobile sector is on a par with other developed markets around the region, but it’s the wireline segment that allows South Korea to stand out from the crowd. This is partly a reflection of the large proportion of its population who live in apartment buildings (around 60%), making fibre and apartment LAN connections relatively easy and cost-effective to deploy. The government’s Ultra Broadband convergence Network (UBcN) had aimed to reach 50% adoption by the end of 2022, but that target may be a few more years away. Still, the country already has one of the world’s highest fixed broadband rates.

Fixed-line teledensity is also at a very high level compared to most of the rest of the world, but it has been on a sharp decline from a penetration rate of 60% ten years ago. That fall has forced the incumbent telco KT Corp to diversify into other telecom segments (including investments in 5G and the development of 6G) as well as non-telecom sectors (such as autonomous vehicles) in an effort to transform itself into a digital platform company. However, a major network outage in October 2021 drew the ire of the government and the police (in addition to the consumers and businesses directly affected by the shutdown), suggesting that the company may need to refocus its attention back on its core business.

On the mobile front, users have enthusiastically migrated from one generation of mobile platform to the next as each iteration becomes available. There also doesn’t appear to be any great concern about there being a lack of demand for 5G in South Korea (when the country is already well supported by 4G networks), with 30% of all subscribers having already made the switch. Part of the reason behind the rapid transition may be the subsidised handsets on offer from each of the MNOs and the MVNOs – a practice that has become so widespread and cutthroat that the regulators has regularly stepped in and fined the operators billions of won for breaching the subsidy level and risking a price war that will ultimately damage the entire industry.