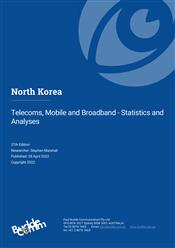 North Korea possesses an underdeveloped yet growing market. The sector has been supported by some foreign investment, including the Egyptian telecoms investment company Orascom Telecom Holdings.

The country has taken steps towards developing a digital economy as part of efforts to modernize its economy and generate export income, especially in the field of IT services. The e-commerce website Manmulsang provides delivery services to all parts of the country.

Communications with the outside world is restricted as citizens are only able to receive news through government-controlled TV channels and radio station, as well as the government-controlled Intranet. A two-tier system applies in the mobile sector, wherein domestic users are unable to make international calls or access the internet while international users cannot make domestic calls. These restrictions are aimed at controlling the flow of information. The same focus on control prompted the government to abandon GSM services for 3G, given the wider facility with which it can monitor 3G calls. Although the 3G network provides near universal population coverage, the number of subscribers remains relatively low.