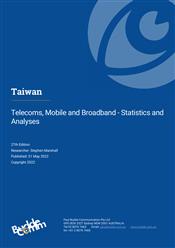 Taiwan has a highly developed telecoms sector in both the fixed-line and mobile segments. In part this is due to the country’s early moves to liberalise the market, allowing vigorous competition to flourish. The government has also made concerted efforts to take advantage of Taiwan’s strengths in the development of high-tech, export-oriented industries to encourage and enable the rapid adoption of advanced telecom platforms, while simultaneously leveraging the same telecoms infrastructure to push even further ahead with the country's industrial development plans.

Taiwan has one of the highest teledensities in the region. While fixed-line subscriber numbers are trending downwards, the rate of decline has been slowed by the major fixed-line provider (Chunghwa Telecom) investing strongly in building out a widespread fibre network to allow customers to maintain a terrestrial voice connection as part of a fixed broadband package.

Fibre is the dominant platform in Taiwan’s fixed broadband market. And yet, cable services have retained an unusually strong following thanks to the success of cable providers in delivering competitive cable TV and telephony services as a way to get around Chunghwa Telecom’s control of the last mile for its copper and fibre networks.

Taiwan also has high penetration rates in its mobile and mobile broadband segments, however growth in both markets is almost at a standstill because the country reached 100% penetration very early on – way back when GSM was first introduced, in mobile’s case. The MNOs moved quickly to roll out 4G and 5G networks and services in rapid succession, but subscriber numbers (and market share) has barely changed. Rather, the hope is that the improved quality and performance available with the new platforms will drive increased usage and ARPU.

Fierce competition following the launch of 4G saw the opposite happen, however, with price wars causing telco revenues to fall instead. It is possible that the same problem can be avoided with 5G, since the three smaller operators have recently been absorbed into the major providers Chunghwa Telecom, Taiwan Mobile, and Far EasTone. Wiser heads may prevail this time around, allowing Taiwan to reach the target of 50% of subscribers on 5G by mid-2023 without succumbing to self-defeating price cuts in order to lure them over.