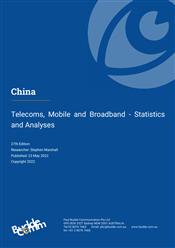 Housing the world’s largest population, China is also home to the world's largest telecoms markets for fixed-line telephony, VoIP telephony, and mobile – at least in terms of the total number of subscribers. Penetration rates in each segment are more modest, however, and therefore there is still significant opportunity for further growth.

China has three integrated telcos – China Mobile, China Telecom, and China Unicom – which provide a semblance of competition across the vast market. But the country’s telecoms sector is perhaps best characterised by the dominant role the central government plays in planning where to invest in infrastructure as well as in research to keep China at the forefront of the industry. Despite the challenges in Western markets faced by China’s major telecom equipment manufacturers (Huawei and ZTE) as well as the offshore subsidiaries of its telcos, China is already working on the development of 6G with the goal of securing lucrative patents as well as influencing the coming standards process.

China Mobile dominates the mobile market with 58% market share, although that has been slowly declining over the years as China Telecom has started to pick up the pace. The latter is also performing well in the fast-growing fixed broadband market, to the point where that segment produces twice as much revenue for the telco as does mobile broadband. With fixed broadband penetration doubling in the last seven years to reach 39% in 2022, China now also has the largest number of broadband connections in the world. The vast majority of these are fibre as a result of aggressive deployment programs by both China Telecom and China Unicom in a bid to offset the decline in the number of fixed-line telephony subscribers. Such is the success of their initiatives that fixed-line teledensity has stabilised at 12.7%, and the fixed segment’s share of overall telecom sector revenue has actually increased during the last decade to more than one third of the total.

In the mobile segment, growth has been on a much slower trajectory of late, partly due to the relative maturity and saturation of the market in some areas, but also because of the Covid-19 crisis putting a heavy brake on the mobile broadband market in particular. Renewed growth is likely to occur following the easing of lockdowns that will allow greater mobility outside of the home, as well as the wider promotion of 5G handsets and services as the telcos continue with their rollout plans.

This report update includes telcos’ operating data and CAICT industry data to March 2022; Telecom Maturity Index charts and analyses; an assessment of the global impact of Covid-19 on the telecoms sector; and other recent market developments.