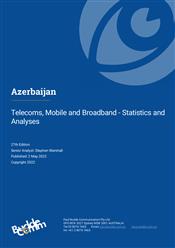 In spite of the telecom sector being one of the major contributors to Azerbaijan’s non-oil GDP, overall development, growth, and investment in the sector has been held back by years of political and civil unrest coupled with endemic corruption.

Mobile penetration rates reached 100% as far back as 2011, but have largely stagnated since then. The MNOs are slowly extending the reach of their LTE networks around the country, and this increased coverage (along with access to faster data-based services) is expected to produce a moderate resurgence for both mobile and mobile broadband over the next few years as customers migrate from 3G to 4G. 5G services are still some ways off, as the demand for high-speed data and fast broadband can easily be met by existing capacity on LTE networks.

Fixed-line teledensity continues to drop down each year as customers consolidate their telecommunications services around the mobile platform. Yet the rate of decline is comparatively slow to other countries, since Azerbaijan has a relatively high proportion of (87%) of fixed-line broadband customers still on DSL. Fibre (12% of fixed broadband connections) is gradually being rolled out in urban areas, and this makes up the bulk of the (limited) growth being seen in the overall fixed broadband market. DSL’s predominance, however, will serve to keep Azerbaijan’s average access speeds in the sub-10Mbps range for the foreseeable future.

This report update includes operator data to December 2020; Telecom Maturity Index charts and analyses; an assessment of the global impact of Covid-19 on the telecom sector; and other recent market developments.