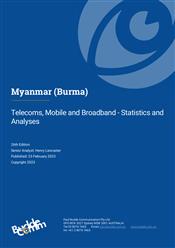 The outlook for Myanmar’s telecom sector – along with the prospects for the rest of the country – appear increasingly grim. A second military coup in February 2021 has reversed much of the progress made since the telecom market was liberalised in 2014. With one of the two privately-owned mobile operators being forced into a fire sale and a rapid exit (leaving 18 million subscribers’ communications now exposed to the junta), there appears little chance of Myanmar returning to anywhere near the levels of growth and relative prosperity experienced during the decade of civilian rule.

Following the awarding of two new mobile licenses (to Qatar’s Ooredoo and Norway’s Telenor Group) in 2014, Myanmar’s mobile market grew tenfold over the following five years to exceed 100% penetration. Mobile broadband followed the same trajectory, growing from practically zero in 2013 to just over 100% by 2019. The onset of the Covid-19 crisis in 2020 is likely to have put a bit of a dampener on the rate of growth, but it was the return to military law at the start of 2021 that has really turned the situation on its head (not the least of which included a complete shutdown of the Internet for the entire month of April).

But even before the coup took place, officials from the Ministry of Transport and Communications (MTC) started issuing orders for the country’s telcos to install surveillance software (spyware) in their networks to allow the army to eavesdrop on the communications (both voice and data) of private citizens. While the government-backed operators MPT and Mytel were most likely to have complied, Ooredoo and Telenor resisted the demands. That led to the military banning the executives of the private operators from leaving the country as well as threats to rescind their mobile licenses. Rather than acceding, Telenor chose to withdraw from the market completely, writing off its entire business in a fire sale to Lebanon’s M1 Group. Ooredoo has not (yet) followed suit, however the increasingly dangerous and unpredictable environment inside Myanmar must be producing near-intolerable operating conditions.

This report includes telcos' financial and operating data updates to September 2021, Telecom Maturity Index charts and analyses, assessment of the global impact of Covid-19 on the telecoms sector, and other recent market developments.