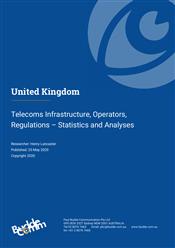 The UK’s telecom market remains one of the largest in Europe, characterised by fierce competition which has resulted in reduced pricing for end-users. Following some market consolidation in the mobile segment there are four key players and a number of MVNOs. Mobile broadband in coming years will place some additional pressure on the fixed-line broadband subscriber base as customers are tempted to migrate to 5G-enabled services. The fixed-line broadband sector has seen the steady decline in DSL and the ongoing efforts among a good number of operators to expand the reach of fibre networks. This is being supported by government efforts to encourage the right economic environment facilitating the ambition to have a fully-fibred UK by 2033.

The fixed-line voice segment is being similarly repositioned, with PSTN services making way for IP-delivered content. BT’s independent wholesale unit Openreach plans to complete the switch to fibre by 2025.

This report analyses the key aspects of the UK’s telecom market, presenting statistics on the fixed network services sector and an overview of the key regulatory issues including the status of interconnection, local loop unbundling, and carrier preselection. The report reviews the major fixed network telcos and examines the status of fixed-line voice services following the deregulation of the retail call market sector.