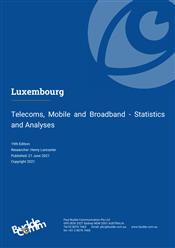 Luxembourg has a small telecom sector dominated by state-owned POST Luxembourg. The Covid-19 pandemic has caused variable effects on overall sector revenue, with gains in the fixed-line segment though a significant drop in the mobile segment as travel restrictions reduced roaming revenue. There remains some pressure from regulatory measures, though no further reductions to fixed and mobile interconnection tariffs have been imposed through to 2024.

POST Luxembourg is extending the footprint of its 1Gb/s service in line with a government program to make Luxembourg the first fully fibred country in Europe. By early 2021 about 72% of premises could access such a service.

Investment in infrastructure is geared towards fulfilling these ambitions. Although the level of investment as a proportion of revenue has fallen in recent years, largely as a response to the completion of major projects, there was an increase in investment in 2020, partly due to the spectrum auction held during the year, as also to the continuing shift by POST Luxembourg to an all-IP platform and the rollout of fibre infrastructure.

High mobile penetration has slowed subscriber growth in the mobile market since 2005, though a recent law requiring SIM card registration has not had an adverse effect on the number of mobile subscribers despite network operators deactivating unregistered cards.