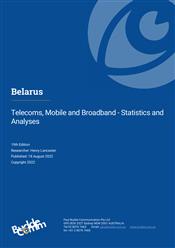 The government of Belarus has successfully promoted the migration to an all-IP platform as part of a wider effort towards a digital transformation for the economy. In the process, the state-supported infrastructure operator beCloud has built an extensive fibre network which reaches all but the smallest settlements in the country. Belarus has the second highest fibre penetration rate in Europe, behind only Iceland. LTE coverage is almost universal, while considerable progress has also been made in developing 5G services.

On the down side, the country faces considerable political and economic turmoil, and telcos have had to invest in network infrastructure while managing a significant fall in the value of the local currency (particularly against the euro and the US dollar).

Although the sector has been reformed, this has not yet resulted in the privatisation of the incumbent, despite the government being pressed to sell state enterprises in a bid to reduce overall debt. Revenue growth for Beltelecom is expected to come from the FttP sector, where much of the company’s capex is directed.

BuddeComm notes that the Coronavirus pandemic is having a significant impact on production and supply chains globally. During the coming year, the telecoms sector to various degrees is likely to experience a downturn in mobile device production, while it may also be difficult for network operators to manage workflows when maintaining and upgrading existing infrastructure.