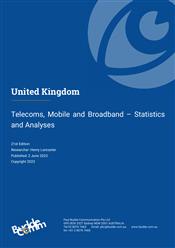 The UK telecoms market extended its pattern of declining revenue into a fifth consecutive year in 2020, dropping a further 1.9% year-on-year. This was despite gains in subscriber numbers in some of the key growth areas of the market, particularly broadband, as well as increases in voice and data traffic brought about by the long periods of lockdown that were in force throughout the country for much of the year. Those upswings were offset by sharp drops in ARPU resulting from an increased preference for bundling, more competitive pricing, and a reduction in roaming revenue due to Covid-19-related restrictions on overseas travel.

The telco market’s gradual downward trend masks what has otherwise been a tumultuous period for UK industry in general. The full impact of the double-whammy that the country experienced with both Covid-19 and Brexit hitting at around the same time is still far from clear. The OECD found that the UK suffered far more than other G7 countries due to the combined effect of these two major events, however early economic indicators into 2021 suggest that the country has the resiliency and ability to fight back — thanks, in part, to the relative success of the Covid-19 vaccination program that has allowed much of the UK population to return to work sooner than its neighbours.

The government is committed to maintaining a strong and competitive telecommunications environment. In policy and in pounds, the industry is receiving a high level of government support for rolling out broadband throughout the country. There is a particularly strong push to extend coverage into more rural and remote areas, with a national Full Fibre broadband access target in 2033. One of the additional downsides to the UK’s withdrawal from the EU, however, is that the country no longer has access to the European Regional Development Fund (ERDF), which previously provided much of the cash for the development of broadband. The UK government must instead fund its fibre-broadband initiatives using internal resources.