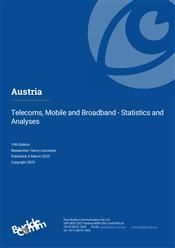 Austria has a mature telecom market, dominated by Telekom Austria, Magenta Telekom (formed from the merger of T-Mobile Austria and the cableco UPC Austria), and 3 Austria. The mobile market benefits from a growing number of MVNOs.

In common with other countries in the region, the telcos as well as the government and regulator have been focussed on delivering improved telecom infrastructure. The government has in train a program to provide a national gigabit service by 2030, delivered by private enterprise though with some state funding. This is based on fibre networks supported by 5G, with the MNOs able to expand the reach of their 5G services following auctions held in March 2019 and September 2020.

The fixed-line broadband market is still dominated by the DSL sector, while the cable broadband sector has held a steady share of connections in recent years. The fibre sector was slow to develop, and although fibre penetration remains low there is considerable vigour among operators to build out network infrastructure. By February 2021, A1 Telekom’s fibre network reached more than 2.3 million premises. Magenta Telekom continues to invest in DOCSIS3.1 technology, and by mid-2021 about a third of premises (some 1.4 million) nationally could access the company’s gigabit service.

This report presents key aspects of the Austrian telecom and ICT markets, including statistical data on the country, the fixed network services sector and telecom infrastructure. It presents an overview of recent regulatory developments affecting broadband access and mobile spectrum.