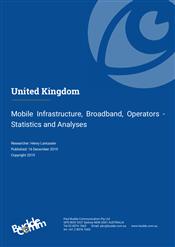 The UK has one of the largest mobile markets in Europe, both in terms of revenue and in the number of subscribers. It is served by several major providers which also have a significant international presence. Recent merger activity has seen dramatic consolidation in the market which has also had knock-on effects for network infrastructure deals struck between operators. The merger of Orange and T-Mobile created EE as the largest operator in the country, and in January 2016 the unit was acquired by BT, which thereby returned to the mobile market after having left it some years before. By contrast, the bid by Hutchison to acquire O2 was rejected by the European Commission in May 2016 on the grounds that the deal would have reduced the number of MNOs to three, and so impacted on market competition.

The market has room for a growing number of low-cost MVNOs providing effective price and service competition for subscribers. The market has also been characterised by developments in advanced data services delivered over upgraded networks, the bundling of mobile as a quad-play service, and regulatory controls on charges and fees. Mobile penetration is above the EU average, and in common with developments in many other European markets subscriber growth has dipped in recent quarters as consumers respond to economic pressures and more generous pricing offers among operators which has negated some of the justifications for multiple SIM card ownership.

Auctions for spectrum in the 2.3GHz and 3.4GHz bands have made more bandwidth available for mobile broadband services, supported by regulatory moves which allow the refarming of 2G spectrum for 3G and 4G use. Spectrum will also be released in the 700MHz band, having been being allocated for 5G use. Operators have expanded the reach of 5G, having launched services progressively during 2019 with a number of key vendor partners.

This report surveys the UK’s mobile market, providing an overview of mobile statistics, regulatory issues and technologies. It also profiles the major operators and MVNOs and looks ahead to mobile market developments in coming years.