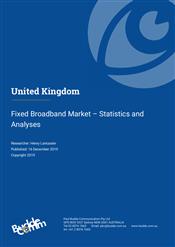 Although the UK’s broadband market enjoys excellent cross-platform competition, the sector remains dominated by copper. DSL infrastructure is comprehensively available, while the main cable operator Virgin Media, owned by Liberty Global, covers about half of all premises in the country. The company aims to provide a gigabit service across most of its footprint, mainly via DOCSIS3.1.

The DSL network has been upgraded during the last few years with VDSL and G.fast technologies, the latter mainly deployed by British Telecom as part of its multi-technology mix. However, BT’s wholesale unit Openreach in mid-2019 began scaling back its G-fast plans, aiming instead to focus on fibre as its moves to provide ultra-fast broadband services to some 15 million premises by 2025. Vodafone is also partnering with CityFibre to deliver an extensive 1Gb/s service to about five million premises by 2025.

For its part, the government has committed to invest over £1 billion in broadband infrastructure through new investment funds, including £400 million in rolling out FttP services. With super-fast broadband available to about 95% of premises by late 2018, the focus in coming years will be to develop the economic conditions to ensure that the target of a fully fibred UK by 2033 can be met.

This report profiles the overall UK broadband market, covering broadband technologies and including the latest statistics, an update on recent commercial initiatives, an assessment of Next Generation Access, and subscriber forecasts.