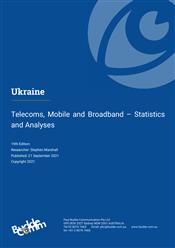 Despite the Ukraine government announcing grand plans in November 2020 to enable the commercial launch of 5G mobile services by the end of 2021 (including a spectrum auction slated for October), there has been remarkably little evidence of any progress being made towards putting those plans into action. That includes near-radio silence on the details of the supposed forthcoming tender. Growth in the mobile sector is likely to remain stagnant for more time to come, while the market waits for the regulator and the three dominant MNOs to crawl towards making faster and more powerful services available for public consumption.

Most of the action with Ukraine’s telecom market has instead taken place behind the lines, with a range of M&A activity resulting in more consolidation or, in the case of Vodafone Ukraine, a role-reversal.

First up was telecommunications service provider Datagroup, which completed its acquisition of cableco Volia in June 2021. The combined entity now operates one of the largest fibre networks in the country, with a reach of more than four million households. Then in August 2021, Vodafone Ukraine reversed its position from 2015 when it had sold its fixed internet and fixed telephony operations in Odessa and Kyiv to Vega. The mobile operator instead acquired 99.9% of Vega, as well as the cableco Cable TV-Finance. In doing so, Vodafone Ukraine broadcast a clear intention to become a quadruple-play provider rather than solely one of the country’s three major MNOs.

This report includes the regulator's market data reports and telcos' financial and operating data updates to June 2021, Telecom Maturity Index charts and analyses, an assessment of the global impact of Covid-19 on the telecoms sector, and other recent market developments.