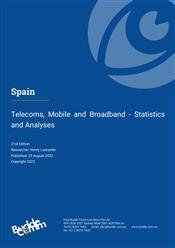 Spain’s telecom sector has tracked the performance of the overall economy, which has been one of the most heavily impacted by the pandemic in all Europe. GDP dropped by 10.8% in 2020, while telecom revenue reversed the previous five years’ positive results by falling 5.3%. Fixed-line services were the hardest hit, with revenue falling 13.7%, year-on-year. Mobile voice services did not fare much better, falling 4.7%. This is despite relatively small shifts in the number of subscribers, though the harsh lockdown conditions resulted in a significant drop in usage.

It had appeared that a return to growth might be possible in 2021 following the lifting of the state of emergency in May, but the most recent surge in cases and the continued restrictions on travel may once again put the brakes on growth until at least 2022.

One bright spot in an otherwise grey landscape was broadband — both fixed and mobile. Spain’s fixed-line broadband market, in particular, managed to extend its decade-long pattern of steady growth into 2020, with a slight increase in demand caused by the need for fast internet access to support working and learning from home.

While most of Spain’s larger telcos delivered negative revenue and profit in 2020 — much in line with the overall sector — the up-and-comer Másmóvil has signalled that it wants to play in the big league. In March 2021, it launched a friendly takeover bid (valued at around €2 billion) for Basque’s fixed-line operator and MVNO Euskaltel. The deal was approved by Euskaltel’s board as well as the competition regulator. If successful, the deal will place the company in a better position to challenge the dominance of the main telcos Telefónica, Orange, and Vodafone.