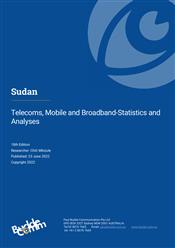 Sudan emerged as a poorer country when South Sudan separated from it in 2011. Although Sudan has about four times the population of South Sudan, the latter benefits from its control of the majority of known oil reserves. The Sudanese economy has been affected by hyperinflation in recent years, partly the result of the loss of oil revenue but also due to domestic volatility and social unrest.

The country entered into a transitional administrative period in August 2019 following protests against authoritarian rule, which had included media and internet censorship. Hopes for a smooth political settlement were dashed in late 2021 when a military coup replaced the transitional government, and many political leaders were placed under house arrest. Elections have been announced for July 2023, though much political horse trading needs to be accomplished before such elections can be taken for granted.

The difficult economic conditions have meant that for several years telcos have reported revenue under hyperinflationary reporting standards. Pressure on revenue has made it difficult for operators to invest in infrastructure upgrades, and so provide improved services to customers. Despite this, the number of mobile subscribers increased 7.% in 20201, year-on-year. This level of growth is expected to have been maintained in 2022, though could slow from 2023 as the acute influences resulting the pandemic begin to wane.

The country’s poor fixed-line infrastructure has helped the development of mobile broadband services. Sudatel, Cameroon’s Camtel, and Chad-based SudaChad Telecom’s planned investment, the WE-Africa-NA terrestrial fibre link, will connect from Port-Sudan then on to Kribi in Cameroon, passing through Chad. The new build aims to respond to rising data demand in all three countries, particularly as usage has been accelerated since the onset of the Covid-19 pandemic with digital and data services gaining traction.