Spain’s telecom market is one of the largest in Europe, supported by a population of more than 46 million. The country’s economy has recovered from the shock consequent to the GFC in 2008/9, which had led to high unemployment and reduced disposable income among consumers. Revenue growth in the telecom sector recovered in 2016 and 2017 though growth fell 0.5% in 2018.

Mobile penetration is on a par with the European average and there remains room for further growth, particularly in the mobile broadband segment which has been supported by continuing investment in infrastructure among operators. The fixed-line broadband sector has also been backed by investment in fibre infrastructure, thus enabling providers to develop improved bundled services and to compete more effectively against other players. The regulator has fostered competition by providing access to the incumbent’s DSL and FttP networks, which has stimulated fibre roll-outs. Telefónica expects to provide 100% FttP coverage by 2024.

Spain has one of the largest mobile markets in Europe, with effective competition from four MNOs and a good number of resellers and MVNOs. This competition, together with regulated roaming and mobile termination rates, has driven down the cost of mobile calls for end users while investment in network infrastructure has also led to a rapid increase in mobile data traffic. With LTE widely available, the focus has shifted to services based on 5G. Vodafone Spain was the first operator to launch a 5G network, in June 2019, while the other players are expected to wait until after the auction of spectrum in the 700MHz bad in mid-2020.

Orange Spain and Vodafone Spain have acquired fixed-line operators in a bid to compete more effectively with Movistar in their bundled service offerings. Másmóvil has also become one of the main FttP providers in the country through its own network infrastructure as well as through network share agreements with Telefónica, Vodafone Spain and Orange Spain.

This report provides statistics and market analyses on the Spanish mobile sector, including an assessment of regulatory issues, a profile of the major providers, and an analysis of mobile data services as well as technologies including LTE and 5G

This report introduces the key aspects of the Spanish telecom market, providing statistics on the fixed-network services sector, and profiles of the main players. The report also assesses the main regulatory issues, noting the status of interconnection, local loop unbundling, number portability and carrier preselection. 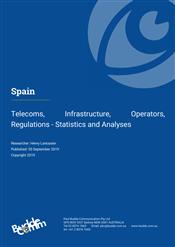