Spain has one of the largest mobile markets in Europe, with effective competition from four MNOs and a good number of resellers and MVNOs. This competition, together with regulated roaming and mobile termination rates, has driven down the cost of mobile calls for end users while investment in network infrastructure has also led to a rapid increase in mobile data traffic. With LTE widely available, the focus has shifted to services based on 5G. Vodafone Spain was the first operator to launch a 5G network, in June 2019, while the other players are expected to wait until after the auction of spectrum in the 700MHz bad in mid-2020.

Orange Spain and Vodafone Spain have acquired fixed-line operators in a bid to compete more effectively with Movistar in their bundled service offerings. Másmóvil has also become one of the main FttP providers in the country through its own network infrastructure as well as through network share agreements with Telefónica, Vodafone Spain and Orange Spain.

This report provides statistics and market analyses on the Spanish mobile sector, including an assessment of regulatory issues, a profile of the major providers, and an analysis of mobile data services as well as technologies including LTE and 5G. 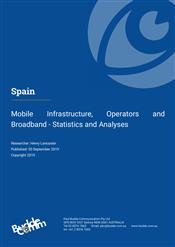