In recent quarters Spain’s broadband market has shifted from copper to fibre infrastructure. By mid-2019 fibre accounted for 62% of all fixed broadband connections. Broadband penetration remains on a par with the EU average, though growth has been stimulated by regulatory measures introduced in 2017 which obliged the incumbent telco Telefónica to reduce wholesale access prices on some submarine cables by up to 35%.

Telefónica continues to invest heavily in fibre infrastructure and expected to cover all premises by 2024. The company’s recent access deal with Vodafone Spain has also significantly increased the latter’s footprint. Vodafone now offers a 1Gb/s service across much of its network, while in the cable sector the company has also invested in DOSCIS3.1 technology. Other significant providers include Másmóvil, which has shared network agreements in place with Orange Spain, Telefónica and Vodafone Spain.

This report profiles Spain’s fixed and wireless broadband markets, together with developments in related technologies such as fibre, and broadband powerline. The report also provides broadband subscriber forecasts. 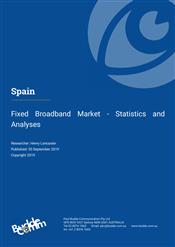