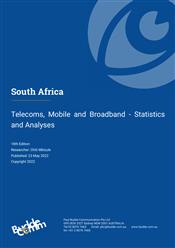 South Africa’s telecom sector boasts one of the most advanced infrastructures on the continent. There has been considerable investment from Telkom, Liquid Intelligence Technologies, Broadband InfraCo, and municipal providers as well as from mobile network operators, such as MTN and Vodacom, all aimed at improving network capabilities. In mid-2021, Vodacom Group announced plans to set up its own InfraCo, merging its own fibre assets with those belonging to two recent acquisitions.

The focus in recent years has been on backhaul capacity and on fibre and LTE networks to extend and improve internet service connectivity. With the ongoing migration to fibre, the incumbent telco Telkom expects to close down its copper network in 2024.

The mobile sector has developed strongly in recent years, partly due to the poor availability and level of service of fixed-line networks, which meant that many people had no alternative to mobile networks for voice and data services.

The multi-spectrum auction was delayed several times due to legal wrangling, and was finally held in March 2022. The delay caused difficulties for network operators, which were forced to refarm spectrum for 3G and LTE use, and provide 5G services on temporary licences. Six qualified bidders acquired spectrum, netting the regulator ZAR14.4 billion in revenues.

In February 2022, Vumatel also acquired a 45% non-controlling stake in HeroTel, a local FttP player as the telco seeks to strengthen its foothold in the South African fibre market. As of February 2022, HeroTel had passed 150,000 homes and businesses, with its internet services live in over 400 South African towns and cities.

The market is shrugging off the impact of the pandemic, which had a significant impact on production and supply chains globally, and saw a slowdown in some network expansions, particularly around 5G.

On the consumer side, spending on telecoms services and devices remains slightly under pressure amid ongoing macroeconomic challenges facing the country. However, the crucial nature of telecom services, both for general communication as well as a tool for home-working, will offset such pressures. In many markets the net effect should be a steady though reduced increased in subscriber growth.