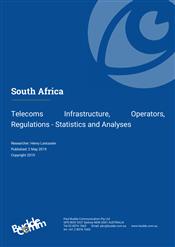 South Africa’s telecom sector boasts one of the most advanced infrastructures on the continent. There is has been considerable investment from Telkom, Liquid Telecom South Africa, Broadband InfraCo and municipal providers as well as from mobile network operators all aimed at improving network capabilities. The focus in recent years has been on backhaul capacity and on fibre and LTE networks to extend and improve internet service connectivity.

The poor historic availability and level of service of fixed-line networks encouraged the growth of the mobile sector for both voice and data services and this segment continues to command most investment and effort among telcos. Under a converged regulatory regime many alternative service providers have been able to enter the market to offer a range of services. Proposed amendments to the Communications Act are intended to improve the ability of new entrants to access networks and further develop a competitive market landscape.

The end of Telkom’s monopoly on international submarine fibre optic cables also reduced the cost of telecom services dramatically. New cables are extending connectivity to India, Brazil and onto the USA, which will further increase international bandwidth and so improve services generally.

Other key regulatory matters aimed at shaping the market include the licensing of LTE spectrum in several bands. A multi-spectrum auction, delayed since late 2016 and which has caused some difficulties for mobile network operators desperately short of spectrum and which have had to rely on spectrum refarming and other measures to increase network capacity, is scheduled for mid-2019.

The major mobile network operators, Vodacom, MTN and Cell C, have also moved into the fixed-line and national fibre sector under a converged, service-neutral licensing regime. In addition, many municipalities in South Africa are implementing their own metropolitan fibre and wireless broadband networks, while several Fibre-to-the-Premises (FttP) deployments are underway.