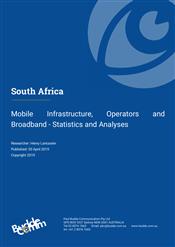 South Africa’s mature mobile market has seen rapid growth since competition was introduced to the sector in the 1990s. SIM card penetration by the beginning of 2019 was about 169%, driven partly by the popularity of multiple card use as also by the take-up of mobile broadband services. Mobile internet accounts for about 95% of all internet connections, and with about 94% of the population able to access WiMAX/LTE services this sector will continue to see strong growth in coming years.

South Africa also promises to be one of the first countries in the region to launch 5G services, following ongoing investment from Rain, Vodacom and MTN. In addition, Helios Towers in March 2019 announced plans to build 1,000 towers in the country in preparation for 5G.

While the major mobile operators have become the country’s leading broadband providers, they have also branched out into providing fixed services, fibre backbone networks, international fibre connectivity, mobile banking and mobile entertainment in a rapidly converging environment. The fixed-line incumbent Telkom has reacted to these market dynamics by launching its own mobile network. Several Mobile Virtual Network Operators (MVNOs) have entered the market, adding to the competitive mix.