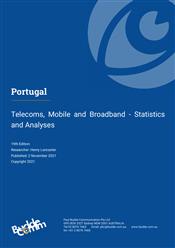 EC opens infringement procedures against Portugal and other member states

Portugal has a medium-sized telecom market with a strong mobile sector and a growing broadband customer base. Before the pandemic, the country had seen improving economic growth, following several years of austerity measures. Revenue among some operators remains under pressure, though investments in network upgrades are continuing in an effort to attract customers to high-end services.

Portugal’s broadband penetration has grown steadily in recent years, largely the result of joint efforts between the regulator and the key market operators which have invested in significant infrastructure upgrades. These operators are focussed on fibre-based services, resulting in a migration of subscribers from DSL infrastructure. Under the ownership of the Altice Group, Altice Portugal is focussed on FttP, aiming to have covered 5.3 million premises by the end of 2020, and providing national coverage.

The cable sector has also shifted towards fibre, with the principal cableco NOS investing in fibre rather than DOCSIS upgrades. In addition, Vodafone Portugal provides fibre to about two-thirds of premises. Much of the growth in the fibre segment has resulted from shared infrastructure deals, including that between Vodafone and NOS. The government has also supported two open-access wholesale networks being built by dstelecom and Fibroglobal.

The mobile market is dominated by the incumbent Altice Portugal, though it is seeing increasing competition from the other network operators, Vodafone Portugal, and NOS. The MVNO market remains largely undeveloped, partly because network operators have their own low-cost brands. In July 2020, for example, NOS launched its sub-brand WOO. Collectively, MVNOs have about 2.9% share of the market. In October 2021 Dixarobil and Nowo secured spectrum in the final stage of a protracted 5G auction.

Population coverage by 3G infrastructure is universal, and most investment in the sector is being directed to LTE and 5G technologies. The MNOs have trialled 5G and are looking to launch commercial services.

This report introduces the major elements of the Portuguese telecom market, presenting statistics on the fixed telephony sector as well as an analysis of the major market players. Additional information is provided on the key regulatory issues, noting the status of interconnection, local loop unbundling, number portability and carrier preselection. The report also covers the fixed and fixed-wireless broadband markets, providing subscriber forecasts to 2026. In addition, the report profiles the mobile market, including statistics on network operators, a review of the key regulatory issues, a snapshot of the consumer market, and an analysis of mobile data services and technologies.

Overall progress towards 5G have been postponed or slowed down in some countries.

Lockdown measures have caused a surge in people working and learning from home and making use of online platforms for entertainment. Fixed networks have gained importance and data usage has soared. This situation is likely to continue into the future as companies allow more employees to work from home after the pandemic has passed. Although Portugal has one of the highest FttP coverage rates in Europe, investment in fibre infrastructure is continuing.

On the consumer side, spending on telecoms services and devices is under pressure from the financial effect of large-scale job losses and the consequent restriction on disposable incomes. However, the crucial nature of telecom services, both for general communication as well as a tool for home working, will offset such pressures. In many markets the net effect should be a steady though reduced increased in subscriber growth.