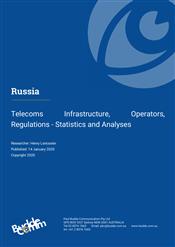 The Russian telecom market is the largest in Europe, supported by a population of about 144 million. The market is dominated by the western regions where the main cities and economic centres are concentrated. All sectors have been liberalised, with competition most prevalent in Moscow and St Petersburg, the two largest regional markets. The former holding company for Russia’s incumbent telecom operators, Svyazinvest, has emerged as Rostelecom, with most regional players absorbed into the operator. Rostelecom subsequently merged its mobile business with Tele2 Russia, which launched mobile services in the important Moscow market in October 2015. In late 2019 Rostelecom acquired the 55% of Tele2 Russia which it did not already owned, thereby strengthening its ability to compete in the market for bundled service offerings.

Telcos continue to deploy and modernise fixed-line network infrastructure to offer improved broadband services as well as a range of IP-delivered content. The government is investing billions of Rubles in a 200,000km telecom network which will provide a broadband service of at least 10Mb/s to thousands of underserved villages. Rostelecom was contracted to undertake and manage the work.

Russia has also emerged as one of Europe’s fastest growing markets for fibre-based broadband, with Rostelecom’s own fibre broadband access network covering more than 35 million premises.

Russia’s recent economic woes, partly resulting from the ongoing global financial crisis and partly to difficulties associated with a range of sanctions related to the annexation of Ukraine, have impacted growth in the telecom sector.

This report provides an overview of Russia’s fixed-line telecom and IT markets. It includes information on key regulatory developments, data on fixed-line networks, and an assessment of telcos’ financial and operating performance.