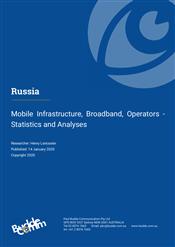 Russia has the largest mobile market in Europe, with the number of subscriptions standing at about 231 million at the beginning of 2020. Mobile SIM card penetration is high, at around 158%, although actual mobile user penetration is lower due to the popularity of multiple SIM card use. There is pressure on operator revenue from the poor economic climate, lower pricing resulting from intense competition, and regulatory measures introduced in 2018 which saw the end of roaming charges.

Several mobile network operators are active, although the market is dominated by four major operators (MTS, VEON, Tele2 Russia/Rostelecom and MegaFon). These have expanded their footprints widely through the acquisition of smaller regional service providers. Tele2 Russia has undergone several changes of ownership in recent years. It became a significant player following its merger with Rostelecom, which it hosted as an MVNO. In late 2019 Rostelecom acquired the 55% stake in Tele2 Russia which it did not already own.

Competition in the key markets of Moscow and St Petersburg is particularly fierce, due to the size of the cities’ populations and the higher concentration of wealth there.

The extensive deployment of LTE infrastructure has supported growth opportunities through mobile broadband and data services, which make up a growing proportion of overall mobile revenue. Investments in carrier aggregation and LTE-A technologies have further boosted network capabilities, while operators are also partnering with vendors to prepare for 5G later in 2020.

This report provides an overview of Russia’s mobile market, covering regulatory developments, the major mobile operators including MegaFon, VEON and Tele2 Russia, as well as technologies and mobile data, content and applications, and a variety of updated financial and operational statistics.