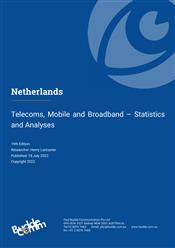 The Dutch telecom market is gradually migrating to upgraded platforms as modernisation schemes undertaken by telcos make steady progress. KPN is steadily replacing its copper access network with fibre, while the MNOs are also closing down their GSM and 3G networks and repurposing their spectrum and physical assets for LTE and 5G. T-Mobile Netherlands has delayed switching off GSM until June 2023 given that the network is still used for M2M connections and other applications.

The country has one of the highest fixed broadband penetration rates in the world, with effective cross-platform competition between DSL, HFC, and fibre networks. In the third quarter of 2020 the number of cable broadband connections fell for the first time, while the DSL segment has long been eclipsed by fibre. By September 2020 about 47.8% of fixed broadband connections provided data above 100Mb/s. Under regulatory measures, the telcos KPN and VodafoneZiggo are obliged to offer wholesale access to competitors: VodafoneZiggo’s wholesale offer was published in March 2019.

This report details the key aspects of the Dutch telecom market, providing data on fixed network services, profiles of the major operators, and a review of the key regulatory issues including interconnection, local loop unbundling, number portability, carrier preselection, and the provisions for competitor access to cable and fibre infrastructure. In addition, the report covers the fixed and wireless broadband markets, including statistics and analyses on technology deployments. The report also assesses the mobile voice and data segments, detailing the strategies of the MNOs, the deployment of emerging technologies, and a range of regulatory issues. A range of subscriber forecasts are also provided.