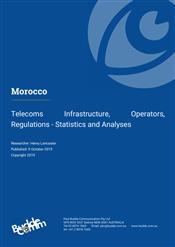 Morocco has developed one of the most advanced telecommunications markets in Africa, supported by government programs aimed at extending the availability of internet services nationally and in developing a digital economy. The part-privatised incumbent telco Maroc Telecom remains the dominant player in the fixed-line sector though has effective competition in the mobile sector. A key regional player, Orange Group, entered the market through the acquisition of a major stake in the telco Médi Telecom (Méditel), which has since been rebranded as Orange Morocco.

The country also has one of the highest mobile penetration rates in the region as well as some of the lowest prices for broadband internet access, despite there being relatively little competition in the fixed-line broadband sector. Competition in the provision of DSL services intensified during 2016 following the launch of services by Inwi and Orange Morocco, though the number of fixed-line broadband subscribers remains far lower than that for mobile broadband accesses. To accommodate the increasing voice and internet traffic, operators have upgraded their fibre optic national backbone networks and international connectivity. In combination with upgraded fibre backhaul, LTE services launched in mid-2015 have facilitated the take-up of mobile broadband in regional areas, and so contributed to the governments aims as drawn up in its National Broadband Plan to 2022.