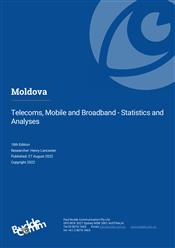 The Moldovan telecom market has been affected by a combination of high unemployment and economic difficulties which have led to constraints on consumer spend. In turn this has resulted in telecom revenue having fallen steadily in recent years. This decline continued into 2020, with a 6.3% in revenue from the important mobile sector alone, year-on-year.

Moldova’s aspirations to join the EU have encouraged the government and regulator to adopt a range of measures to bring the country’s telecoms sector into line with EU principles and standards. In July 2017 the Electronic Communications Act was amended to accommodate the 2009 European regulatory framework, while further amendments were adopted in December 2017 and additional changes were proposed in 2019. Moldova is also part of the Eastern Partnership group of countries, and as such has set in train a glidepath to reducing roaming charges, effective between 2022 and 2026. The country’s broadband strategy through to 2025 has been supported by the ITU and industry counterparts from Korea.

The internet market is developing rapidly, and though the penetration rate is well below the average for most European countries there are many opportunities for further development. The market is highly competitive, with 101 active ISPs as of early 2021, though Moldtelecom and Starnet between them account for most connections. The number of cable broadband subscribers is increasing steadily, though fibre is now by far the strongest sector. By the end of 2020 fibre accounted for about 72.3% of all fixed broadband connections.

The mobile market has also grown rapidly, and the sector accounts for the majority of total telecoms revenue. The triopoly of operators is dominated by Orange Moldova, while the launch of LTE services has opened up a new revenue growth opportunity centred on mobile broadband. The near comprehensive geographical reach of their mobile networks, market brand recognition and existing customer relationships will make for steady subscriber growth in coming years.