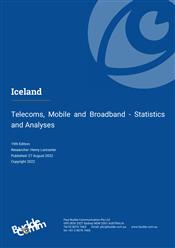 Iceland begins close-down of the PSTN

Iceland has one of the smallest yet most progressive telecom markets in Europe. The country in 2020 became the top in Europe for fibre penetration. It aims to provide a fixed broadband service of at least 100Mb/s to 99.9% of the population by the end of 2021, an ambitious target by international standards and one which it is likely to achieve given the progress which operators have made in extending the reach of fibre networks.

There is effective competition in the mobile and broadband markets, with a number of players having emerged to challenge the dominance of the two leading operators Síminn and Sýn, which have interests across the telecom sectors. Sýn was formerly Vodafone Iceland before being rebranded to reflect the company’s move into broadband and broadcasting following its December 2017 acquisition of most of the telecoms and media interests of 365 Media. The new entrant, Nova, has become the leading player in the mobile market and has quickly expanded its presence in the fixed-line segment, particularly in fibre.

The telecom market has shown some resilience in recent years following the significant economic downturn a decade ago, supported by continuing investment in mobile and fixed-line broadband infrastructure by operators and well as by the government’s Telecommunications Fund which is supporting Next Generation Access networks, particularly in rural areas.