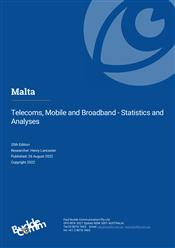 Malta’s small telecom sector is among the most advanced in Europe. This has been helped by the topography, which has made it relatively easy for operators to expand the reach of their fibre infrastructure. With high mobile and broadband penetration rates, the government and regulator have effective strategies in place to capitalise on these infrastructure developments to ensure that the population has among the fastest data rates in Europe, and so is well positioned to take advantage of emerging e-commerce opportunities.

The sector has also been stimulated by regulatory measures designed to reduce consumer prices. Melita having been sold to EQT in late 2019 and Vodafone Malta having been sold to Monaco Telecom, and rebranded as Epic. The incumbent telco GO is investing in a subsea cable to connect the islands to France and Egypt. Expected to be ready for service in 2022, the cable will further enhance Malta’s internet bandwidth and lead to reduced prices for end-users.

There has also been some encouragement to increase market competition. This led to the VULA agreement between GO and Epic Malta, by which Epic was able to enter the fixed broadband market using GO’s fibre infrastructure. In April 2021 Epic began offering FttP services directly, over its own fibre network

Melita provides a national gigabit service via its fibre and DOCSIS3.1 networks, while GO’s extensive FttP network covered about 150,000 premises by early 2021. The company is investing €100 million to develop LTE and fibre through to 2023.