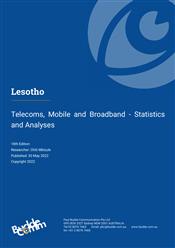 Until late 2020, Lesotho’s telecom regulator maintained a market duopoly between the privatised national operator, Econet Telecom Lesotho (ETL), which is focussed on fixed-line services, and Vodacom Lesotho, which dominates the mobile sector. Competition between the two was insufficient to promote effective price reductions for consumers, while the regulator had no mechanisms in place to monitor the telcos to ensure quality of service and fair pricing for consumers. The small size of the country’s population provided little incentive for new players to enter the market.

Legal wrangling between the regulator and the telcos are ongoing. Both telcos were fined in late 2020, though Vodacom has the more troubled relationship with the regulator. This culminated in the regulator having attempted to revoke Vodacom Lesotho’s operating licence, a process which was temporarily suspended by the Supreme Court after the company appealed. A positive outcome for consumers was the deployment in early 2021 of a service to monitor traffic and billing. This ended the practice whereby the regulator was dependent on telcos submitting data about their performance, billing, and other matters.

The regulator has also turned its attention to addressing multiple SIM ownership and stem incidences of crimes committed using unregistered SIMs. In May 2022, it instructed the country’s MNOs to begin registering SIM cards on their networks from the following month.

Vodacom was the first operator to introduce mobile broadband services in the country, supplemented with a WiMAX network. In late 2014 the company launched commercial services based on LTE technology. This was followed by fixed-wireless 5G trials in early 2019 based on a trial 3.5GHz licence. Vodacom Lesotho was among the first network operators in the region to conduct such trials.

The market is shrugging off the impact of the pandemic which weighed on spending on telecoms services and devices. Consumers remain slightly under pressure amid ongoing macroeconomic challenges facing the country. However, the crucial nature of telecom services, both for general communication as well as a tool for home-working, will offset such pressures over the long term. In many markets the net effect should be a steady though reduced increased in subscriber growth.