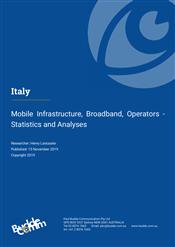 Italy’s vibrant mobile market has one of the highest penetration rates in Europe, though the number of subscribers has fallen in recent years as customers respond to attractive off-net pricing and bundled offers from the main providers. The market underwent considerable changes following the merger of Wind and 3 Italia (becoming Wind Tre). As a result of the merger the market gained a new entrant in the form of Iliad, which secured access to spectrum and to part of Wind Tre’s infrastructure to enable it to offer services while its own network is being developed. The company launched services in May 2018 and had signed up more than 3.8 million subscribers by mid-2019. The popularity of its offers has considerably disrupted the market, leading competitors to rethink their strategies. Wind Tre in particular struggled with customers losses in 2018, while the continuing effort to merge the networks of Wind and 3 Italia was disrupted by the brief ban on commercial ties with its principal vendor ZTE.

Fastweb, which launched services as an MVNO in 2008, was recognised as an MNO in its own right in June 2019. The company has secured spectrum in the 3.5GHz and 26GHz bands, and has a ten-year deal with Wind Tre providing it with national roaming as well as a partner with which to develop a 5G network.

Network operators were among the first in Europe to trial services based on 5G. Recent spectrum auctions raised €6.55 billion, a cost which has encouraged operators to looking at cost-saving options including network build cooperation and the sale of base station portfolios.

This report provides an analytic overview of Italy’s mobile market, including statistics, key regulatory issues and an assessment of mobile data services. It also profiles the major providers and the likely impact of emerging technologies on their strategies for coming years.