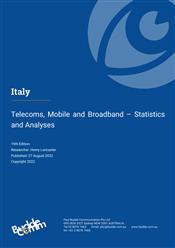 Italy’s large telecom market has one of the most progressive fibre sectors in Europe, with regulatory measures encouraging network sharing. The incumbent telco continues to invest in fibre, despite its recent financial difficulties, while the Open Fiber wholesale provider now has a number of retail contracts which have greatly broadened competition in the sector. Plans to merge Open Fiber with TIM’s fixed infrastructure are ongoing. Regulatory measures have also been introduced to facilitate access to NGNs, and a number of deals have been brokered which enable the main telcos to provide bundled services to large numbers of the population.

Italy’s vibrant mobile market has one of the highest penetration rates in Europe, though the number of subscribers has fallen in recent years as customers respond to attractive off-net pricing which has reduced the financial benefit of having SIM cards from different providers. The market underwent considerable changes following the merger of Wind and 3 Italia (becoming Wind Tre), which resulted in a new entrant in the form of Iliad. In mid-2019 Fastweb was recognised as an MNO in its own right, having been an MVNO for some 11 years. The company has secured spectrum in the 3.5GHz and 26GHz bands and has a ten-year deal with Wind Tre providing it with national roaming as well as a partner with which to develop a 5G network.

Network operators were among the first in Europe to trial services based on 5G. Recent spectrum auctions raised €6.55 billion, a cost which has encouraged operators to look at cost-saving options including network build cooperation and the sale of base station portfolios. The high cost also encouraged the regulator in early 2021 to consider extending the licenses by an additional six years.

This report analyses the key aspects of the Italian telecom market, providing the latest data and statistics on the fixed network services sector. It also reviews the key regulatory issues including number portability and local loop unbundling. In addition, the report assesses the fixed and fixed wireless broadband sectors, including the burgeoning fibre market. The report also analyses the mobile voice and data markets, including statistics, key regulatory issues and an assessment of deployed technologies and operator strategies in the face of competitive pressures and new opportunities.