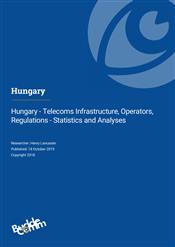 As in many other markets in the region, in Hungary the number of fixed-lines, as also fixed-line revenue, has been affected by the changing consumer use of such services and by the trend for fixed-to-mobile substitution. Fixed-line operators have thus looked to fixed and mobile broadband services to boost revenue and have promoted bundled services offerings in a bid to attract and retain customers. Pursuing this strategy formed part of the reasoning behind Vodafone Group’s mid-2019 acquisition of UPC Hungary.

The economic crisis of a decade ago also affected telecom revenue, though recovery since 2013 has improved disposable income among consumers and so helped revitalise sector revenue. However, financial recovery among telcos has been rendered more difficult by the government’s telecom and utility taxes, as also by regulated measures on termination rates and roaming charges.

The government has struck deals with Maygar Telekom and a number of other operators under which the telcos are extending super-fast broadband access to underserved areas. For its part, the government agreed not to provide funding to competitors in specific areas where telcos undertook to provide network upgrades. Hungary now has one of the most developed telecom infrastructures in the region. Services based on 5G are anticipated shortly after the multi-spectrum auction to be held in November 2019, while the incumbent telco, which already provides a gigabit service to over a third of premises, is fast replacing its legacy copper networks with fibre.

This report provides an overview of Hungary’s telecoms market, highlighting regulatory developments, the major operators, fixed-line network infrastructure and a variety of statistics.