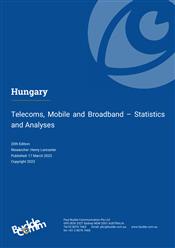 Hungary benefits from having a developed telecom infrastructure, with a focus among operators to develop the 5G sector and upgrade fixed networks to provide a 1Gb/s service. Services based on 5G have been supported by the January 2021 multi-spectrum auction for spectrum in the 900MHz and 1800MHz bands. Digi Mobile failed to secure spectrum, which prompted the operator’s parent company to sell the unit to 4iG.

As in many other markets in the region, the number of fixed-lines continues to fall as subscribers migrate to the mobile platform for voice and data services. Operators have thus looked to bundled packages to boost revenue and retain subscribers. This strategy encouraged Vodafone Group to acquire UPC Hungary in mid-2019.

The broadband market has effective infrastructure-based competition, with an extensive cable network competing against DSL services and a vibrant and rapidly expanding fibre sector. The regulator has also introduced a number of measures aimed at promoting market competition, which is pushing the drive for higher speed platforms and encouraging operators to invest in technology upgrades. As a result, Hungary now has the highest fixed broadband penetration rate in Eastern Europe. By the beginning of 2021, the incumbent telco Maygar Telekom provided a 1Gb/s service to about 2.5 million premises across the country. The number of superfast broadband connections (above 30Mb/s) accounted for 78% of all fixed broadband connections.

The dynamic mobile market is served by four MNOs and a small number of MVNOs. Mobile penetration is relatively high for the region, and there remains considerable growth in mobile broadband services delivered via upgraded networks. Revenue growth is focused on mobile data as operators struggle with competition and regulated tariff reductions, as well as reductions in the MTR.

Maygar Telekom is at the forefront of 5G developments, supported by the government, universities, other telcos and vendors forming the Hungarian 5G Coalition. By March 2021, Vodafone Hungary managed about 300 5G base stations in Budapest and its surrounds, as well as in a number of other cities.

This report provides an overview of Hungary’s telecoms market, highlighting regulatory developments, the major operators, fixed-line network infrastructure and a range of statistics. The report also covers the mobile voice and data sectors, including a review of regulations and operator strategies for adopting new technologies. In addition, the report reviews the fixed and wireless broadband market, including market analyses, statistics and subscriber forecasts to 2024.