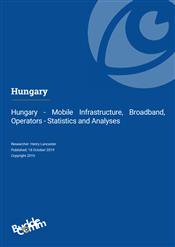 Hungary’s dynamic mobile market is served by three mobile network operators and a small number of MVNOs. The bundled services operator Digi Telecommunications is building up a mobile network based on its 1800MHz and 3.4GHz concessions and has expanded into the fixed-line market through its May 2018 acquisition of Invitel. The company launched its DIGIMobil service in mid-2019, and although it was blocked by the regulator from participating in the forthcoming multi-spectrum auction (a decision which it is contesting in the courts) the company is expanding the reach of its LTE infrastructure using its existing spectrum concession. Vodafone has also expanded into the fixed line segment, following the acquisition of UPC Hungary (among other Liberty global assets across Central and Eastern Europe) by the parent company Vodafone Group.

Mobile penetration is relatively high for the region, and there remains considerable growth in mobile broadband services delivered via upgraded networks. Revenue growth is focused on mobile data as operators struggle with competition and regulated tariff reductions, as well as reduced MTRs.

Maygar Telekom is at the forefront of 5G developments, supported by the government, universities, other telcos and vendors forming the Hungarian 5G Coalition.

This report provides an overview of Hungary’s mobile market, covering the major players, voice and data services and regulations. It includes a wealth of statistics and offers analyses of market dynamics.