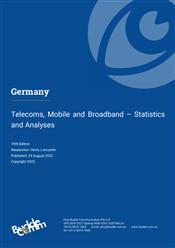 With one of Europe’s largest telecom markets, Germany hosts a number of significant operators which offer effective competition in the mobile and broadband sectors. Telekom Deutschland remains the dominant provider in the fixed-line segment, though there is increasing competition from operators including freenet, Vodafone Germany, and Telefónica Germany, each of which is making use of regulatory measures aimed at facilitating wholesale network access to provide fibre-based broadband services.

The German mobile market is driven by mobile data, with the number of mobile broadband subscribers having increased rapidly in recent years. With LTE now effectively universally available, considerable progress has recently been made in building out 5G networks. Telekom’s 5G service provided about 80% population coverage by March 2021. This was expected to be increased to 90% coverage by the end of the year.

This report introduces the key aspects of the German telecom market, providing data on the country’s fixed network infrastructure as well as key regulatory developments including the status of interconnection, local loop unbundling, number portability, and carrier preselection. The report also covers the mobile voice and data sectors, including an overview of the main operators and their strategies for dealing with competition and emerging technologies, also an assessment of recent regulatory developments and spectrum auctions. In addition, the report analyses the fixed and wireless broadband markets, together with subscriber forecasts and an assessment of developments with related technologies such as FttP, DOCSIS3.1 and powerline broadband.