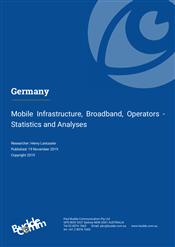 The German mobile market is the largest in Europe, with the number of active subscribers at about 107.5 million as of early 2019. In common with most developed markets, the main driver for growth is in mobile data, with the number of mobile broadband subscribers having increased rapidly in recent years on the back of the near universally available LTE infrastructure. Operators have invested in MIMO and carrier aggregation technologies to provide improved data rates on their networks. Looking forward, considerable progress is expected in the reach and availability of services based on 5G. The regulator concluded a multi-spectrum auction in mid-2019 and although licensees have complained that the cost of their licenses could retard network build in coming years, the first commercial services have been launched.

The mobile market is dominated by the three MNOs Telefónica Germany, Telekom Deutschland and Vodafone Germany, though there is effective competition from a large number of resellers and MVNOs which together command about a quarter of the market. This has placed pressure on voice and data tariffs, which in combination with regulated termination rates and roaming charges has resulted in lower ARPU.

This report provides key statistics and analyses on the mobile market, including an overview of the main operators and their strategies for dealing with competition and emerging technologies in coming years, as also an assessment of recent regulatory developments and spectrum auctions.