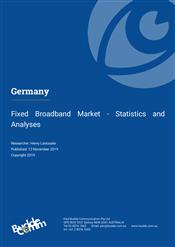 Germany has one of the largest broadband markets in Europe and also one of the more progressive in the pursuit of DOCSIS3.1 and G.fast deployments. The dominant DSL platform is led by Telekom Deutschland, which continues to invest in network upgrades with a focus on a hybrid fibre and vectoring VDSL solution. This strategy is aimed at competing with cablcos which are upgrading their networks, as also at reaching the government’s target of providing a gigabit service nationally by 2025.

The FttP segment has been slow to develop given the emphasis on vectoring DSL, though since early 2018 Telekom has also increased its efforts to extend the reach of FttP beyond business parks and new estates. Investment in fibre backhaul has also been a consideration to support operators’ 5G plans.

This report profiles Germany’s fixed and wireless broadband markets, together with subscriber forecasts and an analysis of developments with related technologies such as FttP, DOCSIS3.1 and powerline broadband.