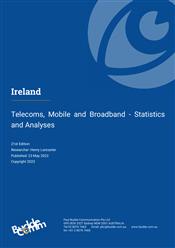 In recent years Ireland’s telecom market has rebounded from a long period in which fiscal constraints inhibited investment in the sector. Significant infrastructure projects are underway, including the NBN which aims to deliver a fibre-based service of at least 150Mb/s nationally by the end of 2022. The renewed optimism has been seen in operator investment in extending fibre-based networks providing 1Gb/s services. The incumbent telco eir is investing €1 billion in infrastructure, part of which is earmarked for its Ireland’s Fibre Network which will deliver a 1Gb/s service to 85% of premises.

The mobile market is dominated by Vodafone Ireland and 3 Ireland, followed by eir. There is room for a small number of MVNOs, the largest of which is Tesco Mobile, though stiff competition and the deployment of low-cost sub-brands by the MNOs has made the MVNO model a difficult proposition and a few players have been forced to exit the market.

The mobile sector is preparing for a multi-spectrum auction later in 2021 which will greatly increase the amount of spectrum available, and so provide a boost for 5G services. The MNOs are rapidly expanding the reach of 5G, with eir alone covering about 57% of the population by March 2021.

This report provides statistics and analysis on the key sectors of the Irish telecom market, presenting an overview of the regulatory environment, the fixed network operators and services, and telecom infrastructure. In addition, the report covers the fixed and wireless broadband markets, together with developments in related technologies such as FttP, powerline broadband, wireless and mobile broadband, Wi-Fi and internet via satellite. Statistics and analyses on the mobile voice and data markets are reviewed, including the recent regulatory issues, a snapshot of the consumer market, and an assessment of emerging technologies and operator strategies. The report also includes a range of subscriber forecasts.