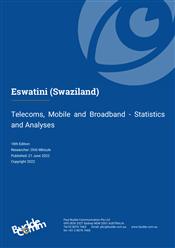 Eswatini (or eSwatini) was one of the last countries in the world to open up its telecom market to competition. Until 2011 the state-owned Eswatini Posts and Telecommunications also acted as the industry regulator and had a stake in the country’s sole mobile network, in an uneasy partnership with MTN Eswatini.

A new independent regulatory authority was established in late 2013 and has since embarked on significant changes to the sector. Eswatini Telecom was provided with a unified licence in early 2016, while MTN Eswatini secured spectrum in the 1800MHz band to provide LTE services. Eswatini Mobile has launched GSM, 3G and LTE services, supported by a network sharing agreement with MTN Eswatini.

Mobile market penetration has been affected by the common use among subscribers of taking SIM cards from different networks in order to access cheaper on-net calls. Subscriber growth has slowed in recent years, but was expected to have reached 8% in 2021, as people adapted to the changing needs for connectivity caused by the pandemic.

The internet sector has been open to competition with a small number of licensed ISPs. Although DSL services were introduced in 2008, development of the sector has been hampered by the limited fixed-line infrastructure and by a lack of competition in the access and backbone networks.

Eswatini is landlocked and so depends on neighbouring countries for international bandwidth. This has meant that access pricing is relatively high, and market penetration remains relatively low. However, prices have fallen recently in line with greater bandwidth availability resulting from several new submarine cable systems which have reached the region in recent years. In addition, Paratus in September 2020 completed a terrestrial cable linking Mozambique with Eswatini and South Africa.

Recognising that increasing digitalisation and access to internet has made more of the country’s population vulnerable to technology-related crimes, the government of Eswatini has implemented its National Cybersecurity Strategy which runs until 2025.