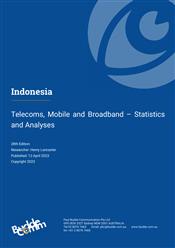 The world’s largest archipelago, Indonesia faces more than the usual number of obstacles in terms of enabling widespread access to quality telecommunications services for its population of more than 270 million. The geographical challenges have been further compounded by a variety of social, political, and economic problems over the years that have kept the country’s wealth distributed very thinly.

Indonesia was relatively successful at minimising the effects of the global Covid-19 pandemic during 2020, but the emergence of the Delta variant in mid-2021 saw a surge in case numbers along with a stringent set of mobility restrictions. While the fixed-line (fibre) and mobile operators have continued to expand and upgrade their networks across the country, the relatively late onset of the Covid-19 crisis – along with the more recent threat of Omicron – may forestall short-term growth in the telecom sector.

Indonesia’s 18,000 islands (many of which, however, are sparsely populated) makes the deployment of fixed-line infrastructure on a broad scale largely impractical. What does exist remains concentrated around major urban centres. The relatively low penetration rate of 4.6% is also a by-product of years of under-investment by the previously state-owned incumbent Telkom. More recently though, there has been renewed activity laying out fibre optic cable – mostly again in built-up areas – but the bundling of fixed-line telephony with TV and internet services will see the country’s teledensity stabilise for the foreseeable future. For all that, Indonesia’s telecom sector is largely a mobile story. In what has become a highly competitive market, mobile penetration has reached more than 130% and is projected to exceed 150% by 2026.

With 4G LTE being practically universally available, the major mobile operators have been busy trialling and launching 5G services in selected areas. Telkomsel was the first to go live in Jakarta in May 2021, followed by Indosat Ooredoo’s launch in the city of Solo a month later. The rollout of 5G will, however, by hampered by the lack of availability of suitable spectrum. Telkomsel, for example, was forced to launch using limited spectrum in the 2.3-2.4GHz band, which is only supported by a small number of handsets. Much of the 4G spectrum had to be re-farmed from broadcasting services, and indications are that the same process is going to have to be followed in order to allow the expansion of 5G into its core frequency bands (3.3 to 4.2GHz).

This report update includes ITU, regulator, and operator data to September 2021; an assessment of the global impact of COVID-19 on the telecoms sector; and other recent market developments.