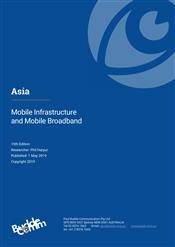 Asia’s mobile subscriber market is now witnessing moderate growth in a fast maturing market. Whilst there are still developing markets continuing to grow their mobile subscriber base at moderate to high annual rates, there are few countries left in Asia with significantly underdeveloped mobile markets and low mobile penetration rates.

In 2019 market penetration is anticipated to reach well over 100%. The stronger mobile subscriber growth rate in emerging markets are evident in countries including Bhutan and North Korea. In contrast developed and mature markets such as Japan and Singapore have seen very low growth, due to their high state of maturity and saturated markets.

Only a few Asian countries have low mobile penetration including India and Pakistan. These countries are generally expected to see moderate subscriber growth over the next five years, as they strive to catch up with the rest of Asia.

Total mobile subscriber market growth will continue to ease off over the next five years as the remaining mobile markets now head towards saturation and their mobile subscriber growth rates ease off. This has already occurred in the more mature markets.

The mobile broadband subscriber base across all of Asia continues to grow strongly. The region’s mobile markets have continued to offer huge potential for mobile data services, driven by the high volume of mobile services. The rapid take-up has been underpinned by increasingly cheaper smartphone prices and lower airtime tariffs.

The total number of mobile broadband subscribers is anticipated to reach nearly 3 billion in 2019. The very high double-digit growth rates of the 2012 to 2017 period are now over as the mobile broadband market matures further. With 3G, 3G+ and 4G platforms extensively covering the region, mobile broadband services have already become well established.

A major shift from mobile voice to mobile data continues across the developing markets in Asia. The more highly developed markets in the region have already seen their mobile networks strongly driven by mobile data services. Developing nations are now following in their path and mobile broadband penetration has grown strongly in most of them over the last five years.