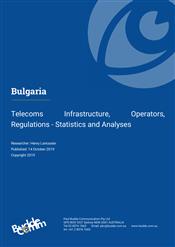 Until recent years, Bulgaria’s telecoms market was affected by the country’s difficult macroeconomic climate, as well as by relatively high unemployment and a shrinking population. These factors contributed to steadily declining revenue across the sector until strong recovery returned in 2018.

Nevertheless, there remains pressure on revenue growth. Consumers continue to migrate from fixed-line voice telephony to mobile and VoIP alternatives, while the volume of SMS and MMS traffic has been affected by the growing use of alternative OTT messaging services. Mobile network operators are also faced with reduced roaming revenue following the decision by the European Commission, which became effective from June 2017, to bring international roaming rates in line with domestic rates. In addition, the preference among consumers for bundled services has reduced revenue from stand-alone offers.

The telecom sector has benefitted from Bulgaria’s adoption of EU regulatory measures, which has encouraged investment in the sector from other telcos as well as private equity firms. The incumbent Vivacom has been privatised, and the government no longer holds the ‘golden share’ which had enabled it to veto certain key decisions. Although the liberalised market has attracted new market entrants, Vivacom remains the dominant player, and is in the process of being sold.

This report provides an overview of Bulgaria’s fixed-line telecom market, including data on regulatory developments, the strategies and performances of the major operators and an assessment of the evolution of fixed-line networks.