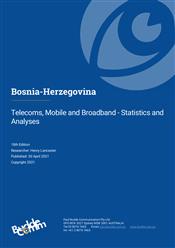 The economic prosperity of Bosnia-Herzegovina (BiH) largely rests with the country’s continuing integration with the EU. GDP growth was inconsistent for several years before 2015, since when the economy had grown at above 3% annually. The measures taken to address the spread of Covid-19 in 2020, which affected trade and tourism, led to GDP growth being negative 5.5% in 2020, though the IMF anticipated that growth of 3.5% was possible for 2021. This is predicated on the virus being controlled, and a return to normal economic activity. There nevertheless remain some significant challenges, not least of which is high unemployment which continues to hinder the country’s economic growth potential.

The telecom market has been liberalised and a regulatory framework created based on the EU’s regulatory framework for communications. Although Bosnia-Herzegovina remains an EU candidate country, in July 2017 it applied amended mobile roaming charges to fit in with changes introduced across the Union. Further roaming agreements were made in 2019 with other western Balkan countries

The market is characterised by three zones, each with an incumbent telco. The largest operator BH Telecom is the dominant provider, while Telekom Srpske operates in Republika Srpska and HT Mostar is active in Herzegovina. Together, these three incumbent operators control 99% of the market. All three are subject to specific obligations designed to improve competition.

The fixed-line broadband network is comparatively underdeveloped, with the result that investments made in mobile upgrades by BH Telecom and Telekom Srpske are facilitating broadband connectivity in the country to a greater extent than is common elsewhere in Europe.

Internet services are available through the incumbents and a number of alternative operators. DSL and cable are the main platforms for fixed-line connectivity, while fibre broadband as yet has only a small market presence.

The three MNOs, each affiliated with one of the incumbent fixed-line operators, provide national coverage with 3G, though LTE coverage is only about 89%. Their upgraded networks are helping to support broadband in rural areas where fixed-line infrastructure is insufficient. In addition, mobile data and mobile broadband offers will provide future revenue growth given the limited potential of mobile voice services. Although the MNOs tested LTE services under trial licenses from 2013, commercial launches were delayed until the award of spectrum in early 2019. The regulator stipulated that licensees must provide national coverage within five years. Trials of 5G technology have been undertaken, though there are no plans to launch services commercially in the short term, given that the MNOs can continue to exploit the capacity of their existing LTE networks.