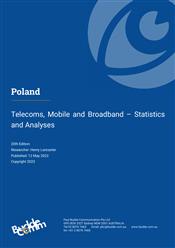 Poland’s liberalised telecom market has seen considerable development in the broadband and mobile sectors. The incumbent telco, Orange Poland, dominates the broadband market and has invested in fibre infrastructure to support the growing adoption of bundled services among customers.

The regulatory environment has encouraged market competition, partly by encouraging operators to secure spectrum and also by ensuring access to cable and fibre infrastructure.

The mobile market in recent years has been characterised by the rapid extension of LTE networks and the development of mobile data services based on newly released and re-farmed spectrum. The regulator’s attempts to auction spectrum in a range of bands has been delayed, with spectrum in the 5G-suitable 3.4-3.8GHz range having been suspended to later in 2021 as a result of the Covid-19 outbreak and legislative changes.

Mobile penetration in Poland is above the European average, though this partly reflects the continuing popularity among consumers to keep two or more SIM cards, which has distorted the real mobile penetration rate. Nevertheless, the distortion has been addressed on two fronts: by network operators being encouraged to disconnect dormant SIM cards, and by legislation which obliges subscribers of prepaid services to register their details. These forces have resulted in a significant readjustment in the number of subscribers in the market.

The market has effective competition from four MNOs, and has room for more than two dozen MVNOs though many of these are small operators with marginal market share. ARPU has been adversely affected by retail tariff competition and by regulatory mandated reductions in mobile termination rates and roaming tariffs. In addition, roaming revenue has been deeply affected by the decline in international travel since 2020. However, operators anticipate that ARPU will rise in line with consumer adoption of mobile data services, facilitated by improved network infrastructure.

The fixed broadband market has benefited from excellent cross-platform competition, with comprehensive DSL infrastructure complemented by extensive cable networks and a growing fibre presence. Commercial considerations meant that fibre was for some years restricted to a number of urban areas, though more recently the sector has received considerable financial support from the government and the European Union. This support is aimed at building fibre-based networks across the country (particularly in eastern areas) and promoting fibre connectivity to end-users. As a result, the proportion of broadband subscribers receiving a service of at least 100Mb/s has increased sharply in recent years.