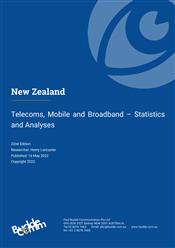 The principal growth areas in in New Zealand’s telecom market have been in mobile broadband and fibre. The UFB1 rollout was completed in November 2019 and the UFB2 rollout is scheduled to be completed by the end of 2022. Chorus noted that as of the beginning of 2022, 1Gb/s plans accounted for about 23% of all fibre connections, while 43% of business customers adopted a gigabit service.

New Zealand’s mobile market continues to undergo significant developments. There have been considerable gains made in LTE services, with effective competition between Spark, Vodafone NZ, and 2degrees. The widening coverage of LTE networks has been supported by the Rural Broadband Initiative rollout, which added a significant number of mobile sites to new or underserved areas. As the initiative is winding down, this has enabled the participating telcos to invest in NB-IoT and other platforms. Vodafone NZ expects to extend its NB-IoT footprint to cover at least 60% of the country by 2024.

The market is undergoing additional consolidation, with approval of the merger between 2degrees and Orcon Group having been granted by regulators in May 2022. This will create the country’s third-largest integrated telco, offering fixed and mobile services in competition with Spark and Vodafone NZ. The merger proposal came fast of the heels of Vocus Group and its local subsidiary Orcon having acquired 2degrees from Trilogy International in December 2021. This deal created a new company, Voyage Digital.