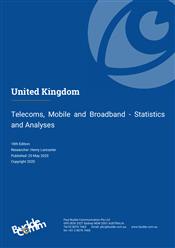 This report provides a comprehensive overview of trends and developments in the UK’s telecommunications market. The report analyses the fixed-line, mobile and broadband sectors. Subjects include:

The UK’s telecom market remains one of the largest in Europe, characterised by fierce competition which has resulted in reduced pricing for end-users. Following some market consolidation in the mobile segment there are four key players and a number of MVNOs. Mobile broadband in coming years will place some additional pressure on the fixed-line broadband subscriber base as customers are tempted to migrate to 5G-enabled services. The fixed-line broadband sector has seen the steady decline in DSL and the ongoing efforts among a good number of operators to expand the reach of fibre networks. This is being supported by government efforts to encourage the right economic environment facilitating the ambition to have a fully-fibred UK by 2033.

The fixed-line voice segment is being similarly repositioned, with PSTN services making way for IP-delivered content. BT’s independent wholesale unit Openreach plans to complete the switch to fibre by 2025.

The UK’s broadband sector remains dominated by copper. Virgin Media is aiming to provide a gigabit service across its network, mainly via DOCSIS3.1, and though the DSL network has been upgraded during the last few years Openreach in mid-2019 began scaling back its G-fast plans, aiming instead to focus on fibre as its moves to provide ultra-fast broadband services to some 15 million premises by 2025.

The mobile market is also one of the largest in Europe, both in terms of revenue and in the number of subscribers. The market has room for a growing number of low-cost MVNOs providing effective price and service competition for subscribers. The country has developed one of the strongest 5G segments, with all MNOs increasing their footprints after having launched services progressively during 2019.

Auctions for spectrum in the 2.3GHz and 3.4GHz bands have made more bandwidth available for mobile broadband services, supported by regulatory moves which allow the refarming of 2G spectrum for 3G and 4G use. Spectrum will also be released in the 700MHz band, having been being allocated for 5G use.

This report analyses the key aspects of the UK’s telecom market, presenting statistics on the fixed network services sector and an overview of the key regulatory issues including the status of interconnection, local loop unbundling, and carrier preselection. The report reviews the major fixed network telcos and examines the status of fixed-line voice services following the deregulation of the retail call market sector. The report also assesses the fixed and fixed-wireless broadband markets, covering technologies and including statistics and an update on recent commercial initiatives. In addition, the report surveys the UK’s mobile voice and data markets, providing an overview of mobile statistics, regulatory issues and technologies. It also profiles the major operators and MVNOs and looks ahead to mobile market developments in coming years.