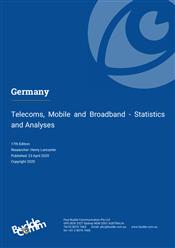 This report provides a comprehensive overview of trends and developments in Germany’s telecommunications market. The report analyses the fixed-line, mobile and broadband sectors. Subjects include:

Germany has one of Europe’s largest telecom markets, as befits a country with a population approaching 83 million. Both the fixed network and broadband markets are dominated by Telekom Deutschland, though other notable players include freenet, Vodafone Germany and Telefónica Germany. These altnets have gained market share as the incumbent continues to struggle against regulated network access conditions and market competition, both of which have led to declining revenue during the last few years though revenue growth was evident in 2019.

The German mobile market is being driven by mobile data, with the number of mobile broadband subscribers having increased rapidly in recent years on the back of the near universally available LTE infrastructure. Looking forward, considerable progress is expected in the reach and availability of services based on 5G. The regulator concluded a multi-spectrum auction in mid-2019 and although licensees have complained that the cost of their licenses could retard network build in coming years, the first commercial services have been launched.

Germany also has one of the largest broadband markets in Europe, supported by a progressive pursuit of DOCSIS3.1 and G.fast technologies. The dominant DSL platform is led by Telekom Deutschland, which continues to invest in network upgrades with a focus on a hybrid fibre and vectoring VDSL solution. This strategy is aimed at competing with competitors including Vodafone Germany which has a wide DSL and cable footprint following its recent acquisition of Unitymedia. Network upgrades, in conjunction with 5G deployments, are required to reach the government’s target of providing a gigabit service nationally by 2025.

This report introduces the key aspects of the German telecom market, providing data on the country’s fixed network infrastructure as well as key regulatory developments including the status of interconnection, local loop unbundling, number portability, and carrier preselection. The report also covers the mobile voice and data sectors, including an overview of the main operators and their strategies for dealing with competition and emerging technologies, as also an assessment of recent regulatory developments and spectrum auctions. In addition, the report analyses the fixed and wireless broadband markets, together with subscriber forecasts and an assessment of developments with related technologies such as FttP, DOCSIS3.1 and powerline broadband.