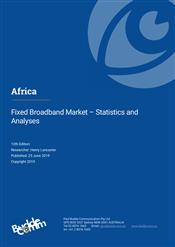 The development of the fixed-line broadband market in Africa has long been stymied by the lack of fixed-line infrastructure in rural and semi-rural regions, as well as by the poor quality of networks in those urban areas where they are concentrated. As a result, mobile networks provide the principal platform for voice and data connectivity. Depending on the market, between 90% and 98% of all internet connections are via mobile networks and thus governments and regulators alike are concentrating on this platform to deliver on their broadband targets.

However, progress is being made to increase backhaul capacity on both the international and national levels. This backhaul is being used to improve fixed-line telecoms as well as to support growing mobile data traffic. New submarine cables are being built to provide direct links to southern Europe and Brazil (the latter with onward connectivity to the US east coast).

Many countries are tapping into existing submarine or terrestrial cables to provide improved links to underserved regions. In Nigeria, for example, the newly commissioned Glo-2 cable will connect Lagos to cities on the south coast with extensions to the existing terrestrial backbone network, while two branching lines will provide onward connectivity to Cameroon and Equatorial Guinea. For its part, the government is committed to building an additional 18,000km of fibre in a bid to extend the reach of broadband from urban areas to rural parts of the country. Although the national network at the start of the project ran to about 38,000km the telecom regulator perceives that the country needs at least 120,000km of fibre to provide national coverage.

These projects are supported by sympathetic regulatory regimes as well as by governments which understand the key functions of broadband connectivity for economic growth. Through this awareness countries are placing greater focus on their fibre-based national broadband plans. These efforts are supplemented by small-scale fibre operators which are expanding their investments beyond the wealthy suburbs and business districts.

These efforts aimed at increasing the use of ICTs and developing broadband penetration are crucial to augmenting economic productivity and GDP growth, and further driving a range of benefits based on enhanced social inclusion.